crickets chirp
at Kerouac's grave
the road is life

Jason Baldinger is a poet hailing from Pittsburgh. He is the author of several books, the most recent are This Useless Beauty (Alien Buddha Press), The Ugly Side of the Lake (Night Ballet Press) written with John Dorsey and the chaplet Fumbles Revelations (Grackle and Crow) which are available now. The collection Fragments of a Rainy Season (Six Gallery Press) and the split book with James Benger Little Fires Hiding (Spartan Press) are forthcoming. You can hear Jason read poems on recent and forthcoming releases by Theremonster and Sub Pop Recording artist The Gotobeds as well as at jasonbaldinger.bandcamp.com
No comments:

The Benefit of the Doubt by Sharon Waller Knutson

That’s what the deputy on our doorstep
says he’s giving the three shooters
who park their 2018 Lexus in our driveway
and fire fifteen bullets into the darkness
while we hide under a desk on the phone
with a 911 dispatcher who tells us to stay safe.
The deputy says he’s not going to arrest them.
They’re just dumb kids who know nothing
about the law. They drove sixty miles
from the city to shoot guns in the desert.
They said they didn’t see the No Shooting signs.
They have a clean record and show remorse.
He sounds like a permissive parent or grandparent
unlike my strict husband who lays down the law:
No shooting after dark. No shooting near a residence.
No shooting on private property. Disturbing the Peace.
The deputy’s face reddens and his voice raises:
You are not a victim. They were not shooting at you.
We insist on pressing charges. I’ll need identification
to fill out the paperwork. He goes to his patrol car,
returns with a younger deputy and no papers.
You don’t have any priors or warrants, he says
handing back our driver’s licenses, letting us know
who he thinks are the real lawbreakers.
The younger deputy speaks in a level tone,
his eyes begging us to listen to reason.
They are only seventeen, they can’t pay the fine,
you’d have to go to court, and there’s paperwork.
We’re going to let their parents handle it
and if they come back they’ll go straight to juvenile hall.
In the end, we reluctantly relent if the shooters apologize.
The younger deputy herds them across our lawn
and under the dim porch light I see my grandsons
in the young man with the wheat colored curls
and the tall teen in glasses, but the ringleader,
who makes excuses, looks just like a politician’s son.
You tortured and terrified us for an hour, I lecture them.
Would you want your grandparents to go through that?
They shake their heads. But I see no trembling lips, shaky legs
or hangdog looks and know this is a familiar routine to them.
They look us in the eye, say sorry and shake our hands and promise
never to do it again after a stern warning from the older deputy.
We never see them out here again. But we do see them on TV.
Hauled off in handcuffs, they look right into the cameras and say
they are sorry for shooting up the school and promise to never do it again.
Sharon Waller Knutson, a retired journalist, writes poetry from her Arizona desert home. Her work has appeared in The Orange Room Review, Literary Mama, Verse-Virtual, Wild Goose Poetry Review and Your Daily Poem. She is the author of five chapbooks: Dancing with a Scorpion, My Grandmother Smokes Chesterfields, Desert Directions, They Affectionately Call Her a Dinosaur and I Did It Anyway.
No comments:

The Weight of Shadows by Corey D. Cook 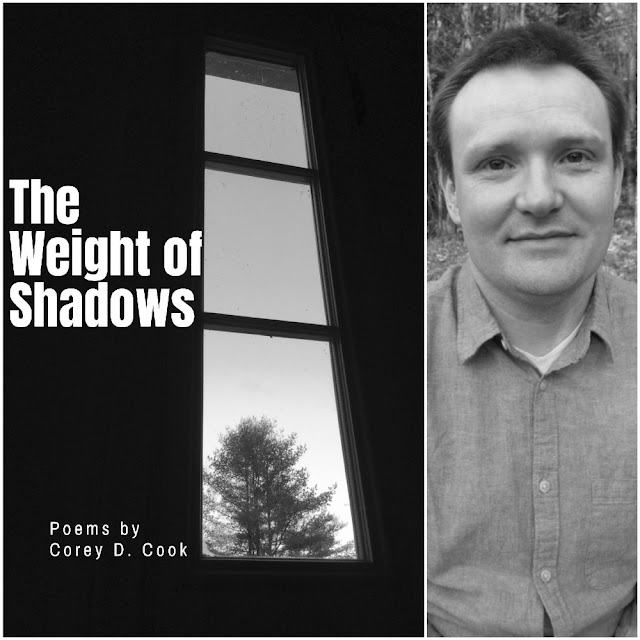 The Weight of Shadows is now available for preorder online at finishinglinepress.com

I also wanted to share that this presale period will determine the pressrun for the book. So if you are interested in buying a copy, now is an opportune time to do so!

All You Need (First Love) by Ben Rasnic

Every day after school,
some fifteen year-old kid
would lie sprawled across
his twin bed mesmerized
by the dried paint drip
on the ice blue ceiling,
with “All You Need is Love”
refraining over and over
on the automatic turntable
as if somehow
that would overwrite
the hideous messages
in his head
telling him
over and over
he was too ugly
to ask out
the prettiest girl
in Mrs. Watson’s
algebra class.

Ben Rasnic currently resides in Bowie, Maryland. Author of four published collections (three available from amazon.com), Ben's poems have been nominated for Best of the Net and the Pushcart Prize.
No comments:

The Weight of Shadows by Corey D. Cook

Monet convinced himself
That each glint of light on haystacks,
Each angle of the sun,
Changed by one degree,
Could be a new canvas.
But I have decided this morning:
No more kayaking poems,
Have said most of what I want to say,
More than once.
On my ritual end-of-season loop
Around the pond this quiet morning
Of the Friday after Labor Day
The only voices are the guys
Working on the huge new place
Where Gaston’s cottage used to be.
I watch to see whose boat
Is still in the water,
Whose dock, pulled up on land,
Exposed, lonely,
Waits for the winter,
Hopes for June.

Robert Demaree is the author of four book-length collections of poems, including Other Ladders, published in June 2017 by Beech River Books. His poems received first place in competitions sponsored by the Poetry Society of New Hampshire and the Burlington Writers Club, and have appeared in over 150 periodicals. A retired educator, he resides in Wolfeboro, N.H. and Burlington, N.C.
No comments:

to think
you don't even
look like a Barbara

caro is a musician, writer, and freelance audio tech living in New York. Her poetry has been published or is forthcoming in Chronogram and right hand pointing. She can be found around the internet @caroblahblah and thisiscaro.com.
No comments:

he is sitting in the glass house of the gas station
as he has done for my entire life
and will do until the end
I am surprised to see him
surprised that after all this time
he still knows my car
still smiles when I say hola
the way a white girl says hola
and looks me in the eye
asking: silver? full?
still gives me the receipt
wrapped around the credit card
and takes my hand with both of his
speaking slow: cuídate, cuídate
an offering for me to take
I, smiling: sí, sí
never thinking twice about
giving my hand
to a stranger in a gas station
never once wondering
his name

caro is a musician, writer, and freelance audio tech living in New York. Her poetry has been published or is forthcoming in Chronogram and right hand pointing. She can be found around the internet @caroblahblah and thisiscaro.com.
No comments:

Time is a Dog; Space is a Cat by Robin Boyd

A dog marks time by smell. He knows
when you're due to arrive home as your scent
molecules dissipate with each passing hour.

He was waiting at the door ten minutes
before you turned left into the driveway --
his tail, a metronome, keeping time to gladness.

His wake-up call is an engine starting on a cold day.
It begins with a low rumble deep in the chest before roaring
to life as a full-throated bark demanding love & breakfast.

He is the grizzled muzzle as the years pass,
the lengthening naps, shorter walks,
long sighs of contentment by the fire.

He forces us to consider our finite lives the day
he politely declines his food. He is an interval,
a path to letting go and taking the risk to love.
* * *

Cats are like birds -- they inhabit a world
both vertical and horizontal and are less
beholden to gravity than most wingless beasts.

They take on the shape of whatever space
they occupy -- a cardboard box, a flower pot,
the span of the dining room table. Sunshine.

They kindly allow us to share their domain
not so much as you might move an inch
or two to make room for me on a bench,

but as a librarian might welcome us
into the stacks, a nod and a slight smile
to acknowledge the pact of amiable silence
as we each follow our own curiosities.

Robin Boyd lives in New Hampshire. With degrees in creative writing and environmental education, her work explores the edges where human and nonhuman worlds connect and inform each other. Her most recent work appears in Cutthroat and Briar Cliff Review. Her book of poems, Among the Slow Roots, was published in 2007 by Gap Mountain Press.
1 comment:

being the runt of the litter,
seemed an appropriate name
for the family dog.

Mornings walking to grade school,
Teenie would follow faithfully
In that familiar crooked gait
despite our most adamant protestations

& when the afternoon bell rang
she would be there
patiently waiting
to escort us home again;

patrolled our bungalow porch
like a loyal foot soldier, the
welcome mat her bivouac,
dreaming of cars to chase, buried
skeletal remains, unfamiliar butts
to sniff;

In summers would hang
with the neighborhood strays
in a world without leashes, exploring
new and familiar territories

as documented
by nine litters
of multi-colored pups;

her lifeless, mange ridden carcass
exhaling a free spirit to roam
in a heaven for animals,
in a world without fences,

chasing hologram automobiles
in a world without pain & suffering;
without hunger or cold.

And when the final bell tolls for me
I know she will once again
be waiting
this time at the crossroads,

to guide me
into a new light,

where ultimately
we must travel
our pre-destined pathways.

Ben Rasnic currently resides in Bowie, Maryland. Author of four published collections (three available from amazon.com), Ben's poems have been nominated for Best of the Net and the Pushcart Prize.
No comments:

A young black woman
in a Red Sox t-shirt
was writhing on the sidewalk,
her right leg splayed
at a gruesome angle,
her face contorted with pain.

Huddled over her
were five or six friends
whose idea of help
was to just keep repeating,
“C’mon! Stand up!”

People say we’re living
in a golden age,
but I shake my head at that,
and if I were you,
I wouldn’t put too much faith
in God or man or robot bees.

Howie Good is the author of The Loser's Guide to Street Fighting, winner of the 2017 Lorien Prize. His latest collection is I'm Not a Robot from Tolsun Books. He co-edits the journals UnLost and Unbroken with Dale Wisely.
No comments: